The core of the project is the development of a multi-sensor platform, with innovative sensors features, performing data integration and data fusion (sensor fusion) interfaced with a central system (ground station) and guided by artificial intelligence that significantly improve mission planning and mission management.

In particular, UniCA– DIEE is responsible for the development of an innovative passive microwave sensor (Radiometer) and the implementation of Deep Learning image classification algorithms on board of each UAV, to perform local, autonomous, image processing operations, removing the need for intense data communication with the central ground station.

Nurjana Technologies is in charge of the study and development of an autonomous guidance and navigation system for the swarm of UAV, based on Reinforced Learning technique. The autonomous agent is trained using both real and simulated scenarios and is able to learn an optimal strategy based on received and sensed inputs, providing a dynamic response and adaptivity to the mission in real time.

The main expected result is the development of a technology demonstrator which prove the possibility to develop and intelligent autonomous navigation agent for swarms of UAV, and to integrate innovative sensing features and low-power on-board data processing that cooperate in real-time. 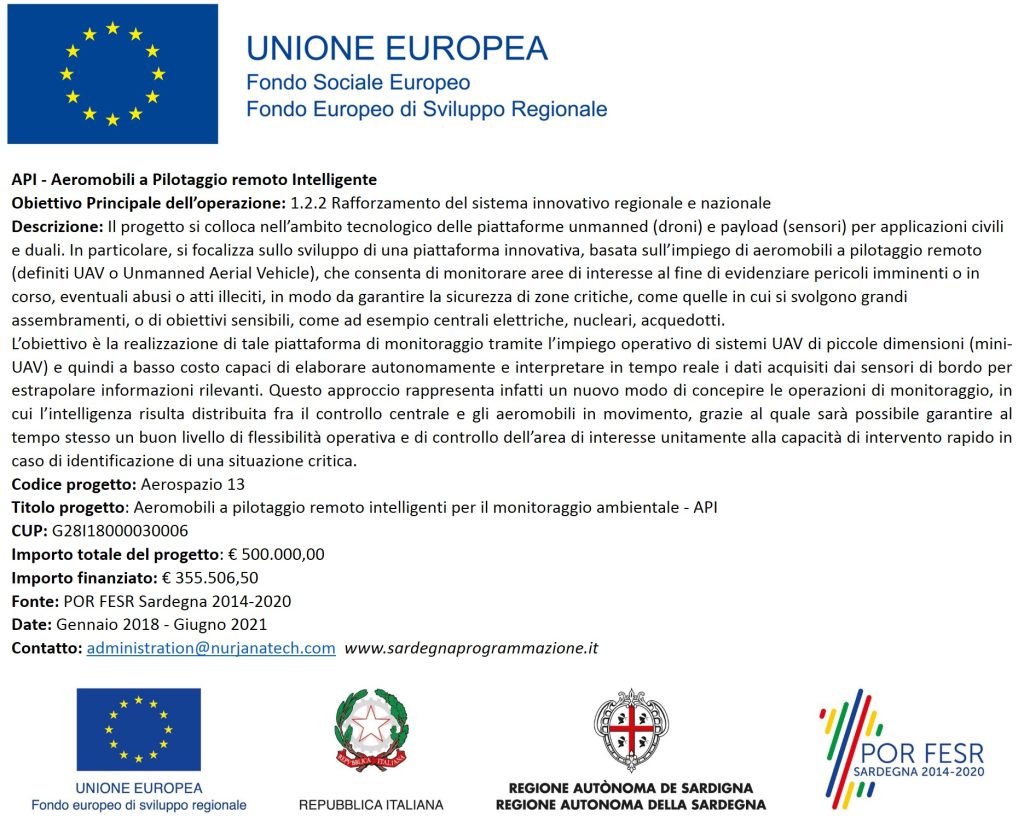 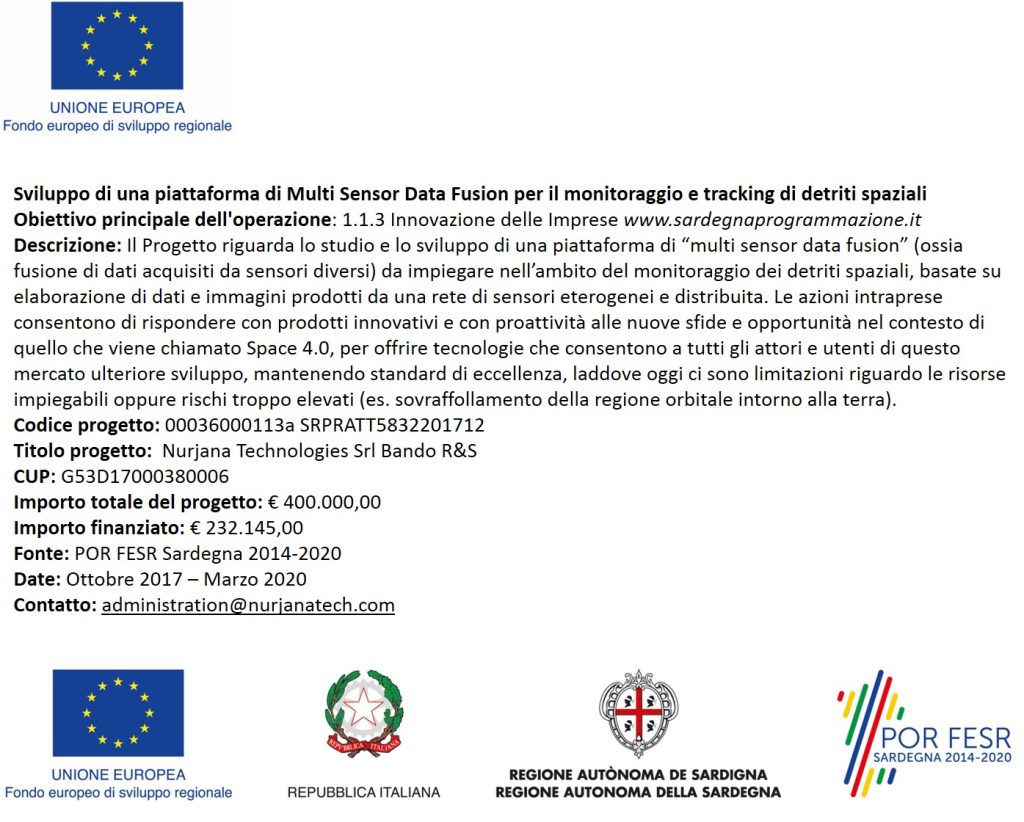 More than 5,000 launches since the start of the space age, each carrying satellites for Earth observation, or communications, for example, have resulted in space becoming increasingly congested.

This is why the problem of space debris is becoming increasingly urgent: in addition to hazardous space environment, large objects, such as dismissed satellites, rocket parts, etc., can re-enter the Earth’s atmosphere in an uncontrolled way, creating risks to the safety of people and things on Earth.

NT R&D activities focus on the study and development of a “multi sensor data fusion” platform (ie merging data acquired from different sensors) to be used in the field of space debris monitoring, based on processing of data and images produced by a heterogeneous and distributed sensor network such as:

The “Sensor Data Fusion” process consists of merging data from multiple sensors and implementing an Expert Decision System. The system has the function of filtering and correlating large amounts of data, to improve the overall performance of the monitoring system and to give to the user useful information for the management of one or more space missions, in relation to the dangers arising from space debris.

The aim of MOSE is to exploit new information technologies to support the management of interventions in situations of immediate danger or impact to environment or human welfare, such as in the dramatic Coronavirus emergency, but also to effectively manage the phases of prevention.

The MOSE project involves the development of an innovative software solution based on the most advanced clustering technologies for the optimization of distribution and flow of the tools for the management of emergency situations taking into account the probability of risk (fires, pandemics, delinquency, accidents, etc.) associated with a specific highly critical area (red areas).

Based on the processing of satellite data and forecast models, in the COVID19 emergency context, MOSE will allow to:

The advanced technology of MOSE will concretely support the work of the personnel involved (augmented intelligence) during the delicate control and safety phases of emergency events.

Our project S2IGI, developed with our partners CNR-IBIMET and Aerospace Engineering School of the Sapienza University of Rome (SIA), will contribute to the reduction of damages caused by forest fires to the environment and to the economic activities through the development of an informative prototype system that integrates innovative techniques of data elaboration provided from new satellite technology and forecasts provided from high-resolution weather patterns.
S2IGI has as its specific objective the support for the operative activities of fire-fighting, via the realisation of systems and specialised software applications based on satellite technologies.
The ultimate result of the project will be the development of an integrated software system, based on the elaboration of a satellite imagines plus other ancillary, weather data and also archiving of various elaborate information, able to present to the decision-makers and specialist officer to the activities the various maps and information described above in relation with the three phases of activities.

Can’t Find What You’re Looking For?

This website uses cookies to improve your experience while you navigate through the website. Out of these, the cookies that are categorized as necessary are stored on your browser as they are essential for the working of basic functionalities of the website. We also use third-party cookies that help us analyze and understand how you use this website. These cookies will be stored in your browser only with your consent. You also have the option to opt-out of these cookies. But opting out of some of these cookies may affect your browsing experience.
Necessary Always Enabled
Necessary cookies are absolutely essential for the website to function properly. These cookies ensure basic functionalities and security features of the website, anonymously.
Functional
Functional cookies help to perform certain functionalities like sharing the content of the website on social media platforms, collect feedbacks, and other third-party features.
Performance
Performance cookies are used to understand and analyze the key performance indexes of the website which helps in delivering a better user experience for the visitors.
Analytics
Analytical cookies are used to understand how visitors interact with the website. These cookies help provide information on metrics the number of visitors, bounce rate, traffic source, etc.
Advertisement
Advertisement cookies are used to provide visitors with relevant ads and marketing campaigns. These cookies track visitors across websites and collect information to provide customized ads.
Others
Other uncategorized cookies are those that are being analyzed and have not been classified into a category as yet.
SAVE & ACCEPT